What is topographic prominence?

The SOTA Management Team recommends a minimum "relative height" or "prominence" for summits of 150 metres (about 492 feet).  Summits need to be distinct peaks.  In other words there must be a 'vertical separation' of at least the Association's prominence value, between the summits and their associated saddles (also known as cols).

The summits of mountains have long been known by their elevation above mean sea level.  Now a growing community of climbers, mountain enthusiasts and mathematicians recognize that summits can also be measured by their elevation relative to the surrounding terrain.

Prominence is defined as the vertical distance a given summit rises above the lowest col connecting it to a higher summit.  Or, put another way, it is the elevation difference between the summit of a peak and the lowest contour that contains the given peak and no higher peaks. Imagine the ocean rising to the exact point where a certain peak is the highest point on its very own island. At that point, the prominence is the elevation of the peak above the risen ocean.
That all sounds confusing, yet prominence is actually a fairly intuitive and commonly used concept.  The best way to visualize it is to imagine that you are on a major summit and you start hiking down a ridge. After descending for 1000 feet, you start climbing again and gain 200 vertical feet to gain a sub-peak along the ridge. This sub-peak has a prominence of 200 feet, since that is how far it rises above the col connecting it to the major summit.

In summary, prominence categorises the height of the mountain's or hill's summit by the elevation between it and the lowest countour line encircling it and no higher summit.  It is a measure of the independent stature of a summit.  In essence, how much a mountain stands out from its surrounding terrain.

For SOTA purposes, a peak is not a peak if it does not have the required 150 m prominence.

"Summits should be distinct peaks.  This means that there must be a vertical separation of at least the association's prominence value, between Summits and their associated cols (also known as saddles).  Peaks separated by a shallow col should be considered as a single Summit.  This principle ensures that there is a distinct climb associated with every Summit". 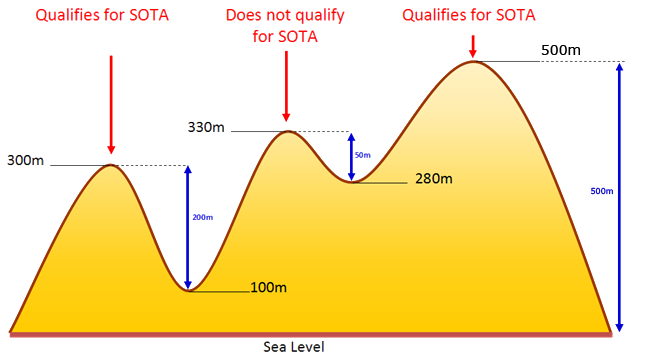 More information on topographic prominence can be found at.....

Col is the standard term used to refer to the lowest point on the ridge between two summits. There are many synonyms: Pass, Gap, Saddle, Notch, or Cut; Joch in German, Colle in Italian, etc.

Video on how to read a topographic map

Presentation on Prominence by VK5PAS.