Why give a signal report?

A signal report is one of the basic features of an amateur radio contact (QSO).  An exchange of signal reports to each participant in the QSO, lets each party know how well they are being heard.

The R-S-T system is used by amateur radio operators, shortwave listeners, and other radio hobbyists to exchange information about the quality of a radio signal being received.  The RST system is a three digit number, with one digit each for conveying an assessment of the signal's readability, strength, and tone.

The first number in the RST report is the readability of the signal or how understandable a signal is.  This ranges on a scale of 1-5, with 1 being 'unreadable' and 5 being 'perfectly readable'.  Factors which impact on readbility include QRN (atmospheric noise, static crashes, QSB (fading), and QRM (man made noise, e.g. plasma TV noise).

The third number refers to Tone and applies to CW (Morse Code).

History of the RST system.

The RST system has been in use with amateur radio operators since about 1934.  Prior to this a number of schemes were devised to quantify how well a signal was being received by a receiving station.

The RST system was developed by Arthur W. Braaeten W2BSR, who proposed a simple, less confusing, and more acurate system of reporting a station's readability and signal strength. At this time CW was the primary means of communication, with AM transmissions starting to be utilised by amateur radio operators.

A 1934 edition of QST magazine stated:

'In August QST KA1NA emphasized the need for change in our signal-report practice.  We think W2BSR's R-S-T system answers a very definite need.  In it we find no such glaring inconsistencies in existing usages'. 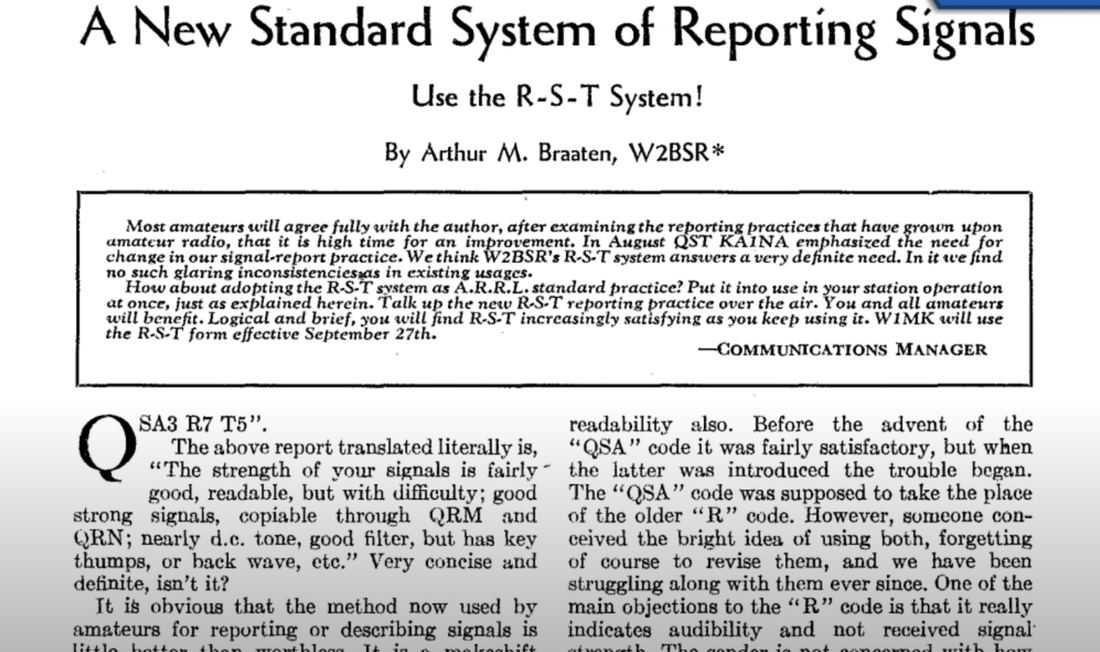 Back in 1934 when the RST system was implemented, most receivers did not have S meters.  Those that did, had widely varying calibrations.  It was for that reason, that when a signal report was to be given, it was the operator's ears which were utilised to select the appropriate Readability and Signal Strength numbers.

​Most amateurs now use modern receivers which have relatively accurate S meters.

S meters are generally graduated 1 to 9 which corresponds with the RST scale, with most receivers adding levels of above 9, e.g. +10, +20 dB.

Remember, S meters are only a guide as to signal strength, as there is often no consistency in S meter calibration between different receivers. 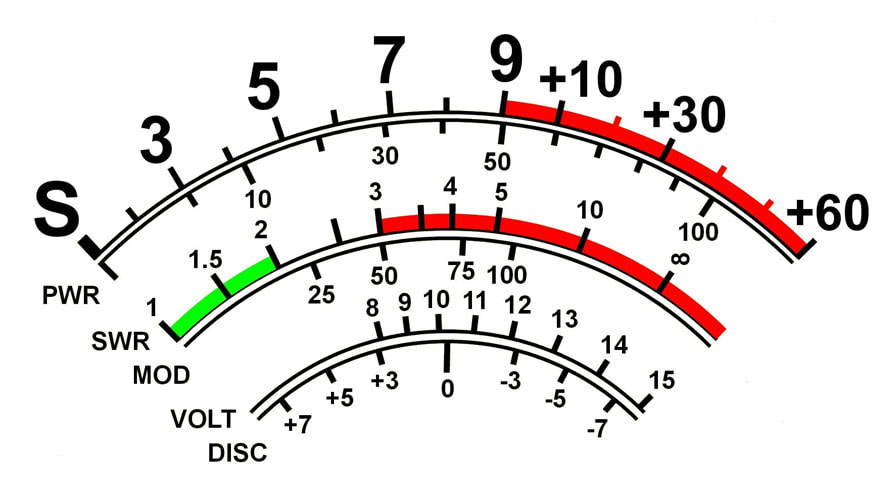 ​Firstly I would not come back with a long over, as clearly my readibility is 'readable with considerable difficulty' and my signal is 'weak'.  This short over is to minimise the frustration of trying to copy me.  I am always amazed at amateurs who get a poor signal report and yet come back with long rambling overs, only to be told again by the amateur at the other end that they were struggling to hear the station well.

If my readability is only 3 or 4, it alerts me to the fact that I should spell my name and QTH phonetically, or repeat certain important points.

An accurate signal report also tells me about propagation and how well my signal is being heard in a specific geographic location on a particular band.

Don't be embarrassed by giving a 33 signal report.  If you are having trouble hearing the station, let them know. 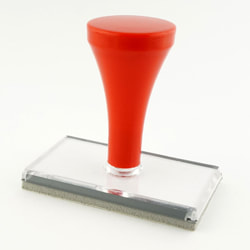 In contests you will invariably hear 'rubber stamp' 59 signal reports, even if the station is having difficulty in hearing the other station.  Why is this?

An accurate signal report is not required in a contest.  Only the exchange of the required contest information, e.g. serial number.

Contest stations are trying to work as many stations as possible in a particular period of time, and issuing 'accurate' signal reports takes time.

As with Contests, you may hear a DX station in a DX pile up, just giving 59 signal reports even when the signal is lower in quality.  This is because the 'important' thing is that you are in their log, not the actual signal report.

Generally the RST system is not used in FM repeater contacts.  The common terms used to describe FM signal quality are:-
​

"Can You Read Me Now?" by Steve Sant Andrea AG1YK.

"Genuine Signal Reports with Copyability and Strength" by Bruce Prior N7RR.