THIS PAGE IS UNDER CONSTRUCTION AND STILL BEING RESEARCHED/COMPLETED.

HISTORY OF DETECTIVES IN SOUTH AUSTRALIA.

The colony of South Australia was proclaimed on the 28th day of December 1836.

The South Australian Police Force is the oldest centrally controlled police service in Australia and one of the oldest in the world.  It was formed on the 28th day of April 1838, following concerns that 'felons' were entering the colony of South Australia from the neighbouring colonies.

At its formation the South Australia Police was under the command of Inspector Henry Inman, and comprised of 10 Mounted Constables and 10 Foot Constables. 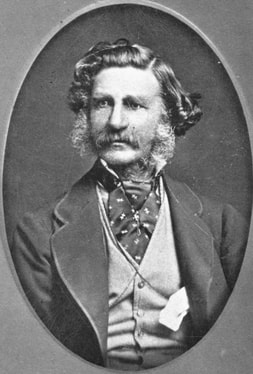 The South Australian Register, Friday 3rd June 1853, printed the 'Report of the Commissioner of Police'.  This was a report submitted by Commissioner Tolmer to the Lieutenant- Governor.  In the report Tolmer stated the following:
"In the nature of an experiment by which I might feel my way to a sounder system, I selected, some months back, two or three of the most efficient men of the Metropolitan Division to act as a Detective Force.  I have now to state, that the results have been successful; several of the worst characters in the city and environs have thereby been brought to justice, and gangs broken up and hunted out of the colony.  I do myself the honour to submit, therefore the expediency of placing a sum on the Estimates for the ensuing year, especially for this service.  Should his Excellency approve of such a measure, I would respectfully beg to recommend that the detective branch should consist of two sergeants and six constables, who should be selected out of the whole force for this peculiar business, and be exempt from all regular duty, enabling them thereby to employ their time wholly in the actual pursuit of criminals, or in obtaining information as to facilities for the commission of particular offences, and the haunts and habits of the offenders.  In this art depends much upon individual qualifications, sagacity in drawing inferences from slight things, fertility of resource, a blood-hound tenacity or pursuit, intimate acquaintance with the habit of thieves, and their probably mode of acting in particular circumstances, and in the knack of making a cast in the right direction in search of a clue".

​By mid 1853, Commissioner Tolmer had recommended to the Lieutenant-Governor to place a sum on the estimates for the employment of a Detective Police Force.

This branch of the Police would consist of two Sergeants, and six Constables whose 'time should be employed either in the actual pursuit of criminals, or in obtaining information as to the habits and haunts of offenders'.

1853 - Establishment of a Detective Branch.

Tolmer succeeded in the creation of a Detective Branch.

By November 1853, a new Police Commissioner had been appointed, Peter Egerton Warbuton.

​Alexander Tolmer had been dismissed and demoted to the rank of Inspector. 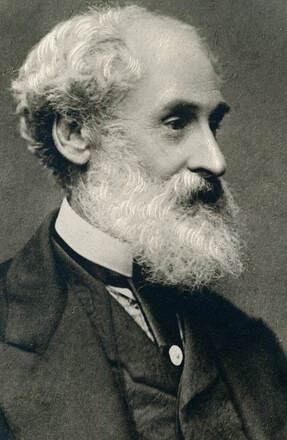 "The Metropolitan Police has been brought up to its allowed strength, and sufficiently drilled to move in an orderly and compact manner, by the exertions of Inspector Reid; and the establishment of a detective branch under two sergeants  has added to the efficiency of Mr. Reid's force.  I am, however, doubtful whether a fixed detective establishment is at present the best system that could be adopted.  I should prefer that, when cases calling for peculiar activity and intelligence arise, the requisite number of picked men (whether mounted for foot police) should be employed, giving them, as a present, a shilling a day extra during the period of such employment.  I think this plan would not only be more economical, but would keep alive a higher spirit of emulation throughout the whole force, and on both points the public would be the gainers.  When the present system has had a longer trial, I shall revert to the subject."

It is believed that the first South Australian Detective Sergeants were Sergeant Richard Nolan and Sergeant Davis.
In 1854 Sergeant Nolan was mentioned for distinguished service in the Police Commissioner's Quarterly Report.

Unrest soon commenced between Foot Police and the Detectives.

"Up to this time, it appears there had been men kept exclusively for detective duties, but this led to jealousy, and, what was worse, it led also to the establishment of a dangerous power in the hands of some members for the force.  The detectives became an imperium in imperio, a body of men who collected information, and then exercised their own will as to what part of it they should divulge.  The Commissioner says there was a withholding of information, so that the detectives became an injury rather than a benefit to the public service.  He therefore abolished then altogether, and adopted the rough and ready plan of making every man a detective when circumstances required it"

In 1866 a Select Committee of the Legislative Council was established and was chaired by Chief Secretary Arthur Blyth. 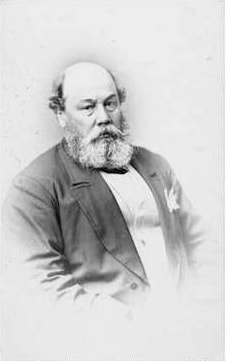 The Committee tabled its report in January 1867.  One of the recommendations was the establishment of a 6 man 'detective force' under the command of an Inspector. 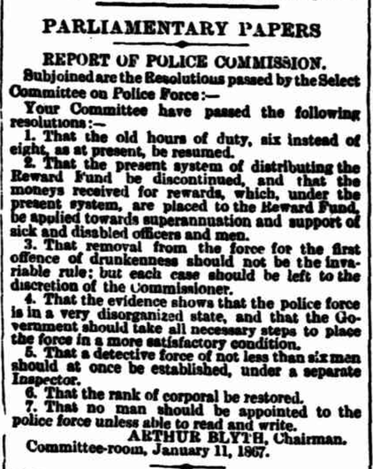 1867 - Re-establishment of the Detective Force.

Following the Select Committee on the Police Force, the Detectives Force was re-established by then Police Commissioner Hamilton.  He established an office which comprised an Inspector and five Detectives. 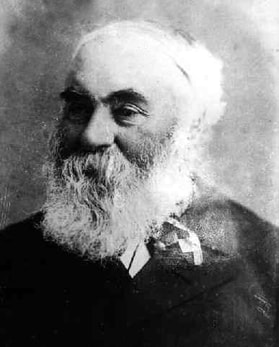 Richard Dempsey was appointed as the first Detective Clerk.  He divided the Adelaide metropolitan area into distinct Detective Divisions with one Detective appointed to each Division in which he would reside.

Each Detective was required to compile a special file which listed every house with details of the occupants and any 'special remarks'.  This was to ensure that Detectives had intimate knowledge of persons in their area.
Members of the community saw this as an intrusion of their privacy and as a result Commissioner Hamilton cautioned the Detectives not to annoy the public unduly as this may result in a loss of support and the loss of valuable information.

One woman complained that when visited by the Detectives, they remained at her home for considerable time drinking alcohol.

Another member of the public complained that the Detectives had threatened her landlord when she refused to help with their enquiries.

​Other allegations included that the Detectives were accepting bribes, and performing domestic and private espionage on behalf of people outside of the police department.

The Detective Force was located in a small building in Gilbert Place, Adelaide.  It was rented from a Hindley Street confectioner.
The South Australian Register of Wednesday 22nd January 1868 described the office:

"In a snug corner of Gilbert Place, with a very convenient access into the busy thoroughfare of Hindley-street, there is a small office, whose character would be little suspected by the casual passer-by.  The door always stands invitingly open, like that of a commission agent in his first year of probation.  The internal appearance and fittings of the room are neat, indicating a successful adaptation of upholstery to business.  Everything is so sedate and respectable that the last place in the world one would suppose it to be is a house of call for Bow-street runners.  And yet that is its function.  It is the office of the new Detective Force established by Mr. Commissioner Hamilton about a year ago". 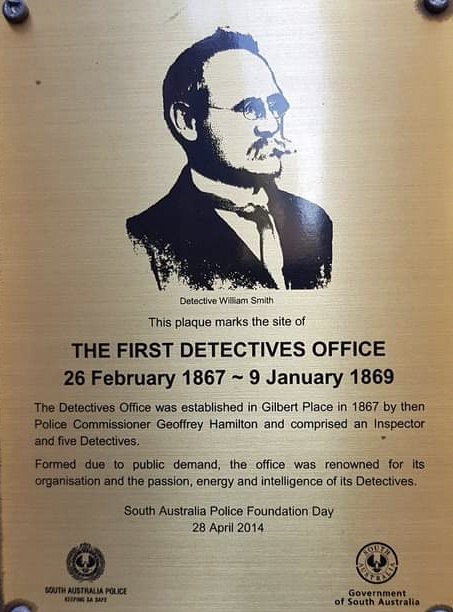 Upon a crime being reported, the particulars were recorded by the constable, troooper, or officer in charge.  The form set forth the nature and locality of the offence, the date and

In 1869 the South Australian government ordered retrenchments in police strength.  This resulted in Detectives being removed from Government Estimates and being returned to normal duties.

In the Police Commissioner's Report of June 1869, Commissioner Hamilton reported to the Government:

"During the quarter the separate detective force was merged into the Metropolitan Police.........The Metropolitan Inspector also reports well of the conduct of the police under him, and especially that of the constables told off for detective duty."

1875 - Reformation of the Detective Branch.

The Detective Branch was not reformed until 1875 at which time it was placed under the command of Inspector William Peterswald. 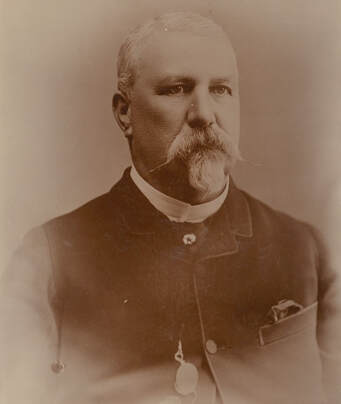 Above:- William John Peterswald.  Image c/o Wikipedia.
In 1875 the South Australia Police consisted of the following:-

In 1881 still referred to as Detective Force. 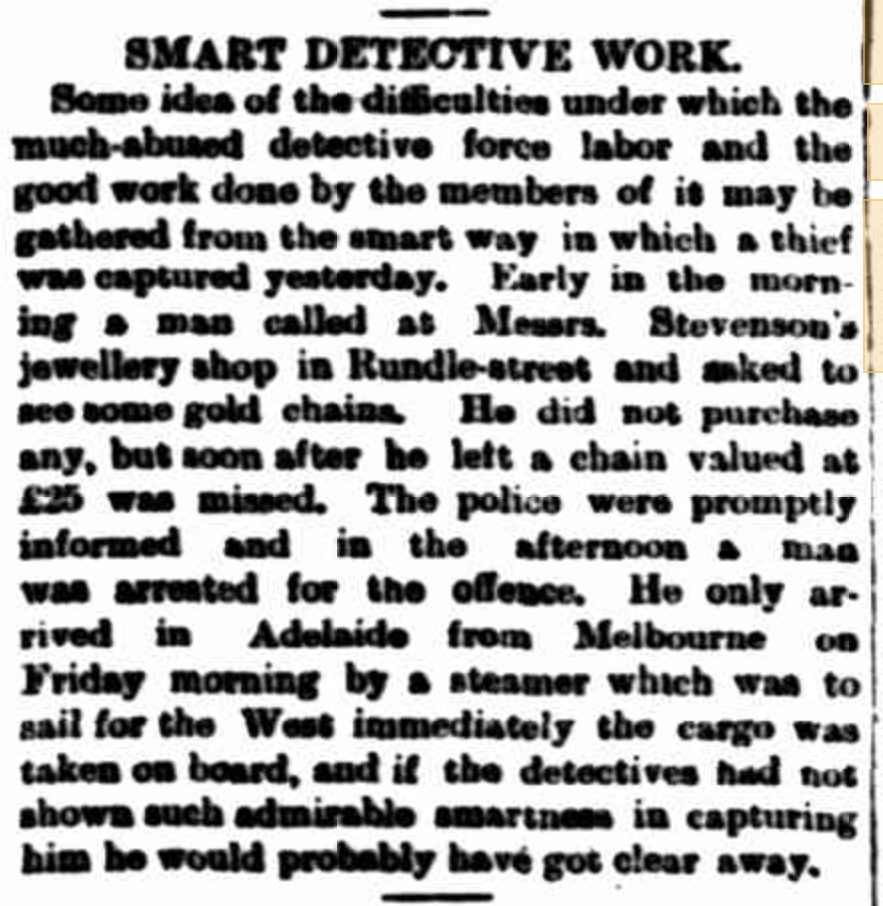 Above: Article from The Advertiser, Sat 17 Jul 1897.  c/o Trove
Early 1900s.
In 1903 the Executive Council appointed Mr. Thomas Edwards to be the Sub-Inspector of detectives, in succession to the late Sub-Inspector Upton. 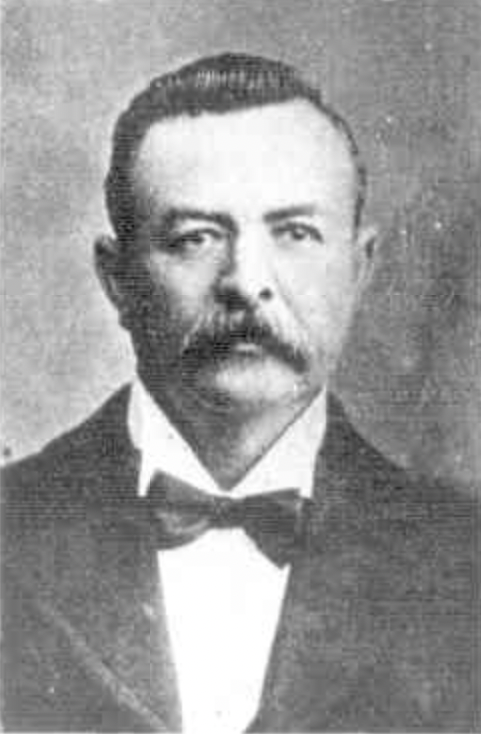 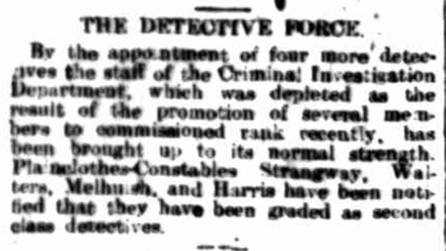 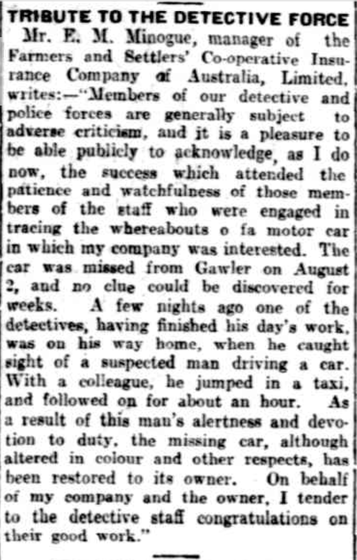 The first annual dinner of the Criminal Investigation Branch Association of South Australia was held in December 1925.  The dinner was held in the presence of leading members of the business, legal, and medical professions.

Mr. M. J. Hogan, Chairman of Stpendiary Stewards who was a guest at the dinner, stated:

"Few people are aware of the multifarious duties which devolve upon a detective".

Detectives as a Sub-branch of the Police Association.

Brig-General R.L. Leane, the Commissioner of Police stated that serious crime in South Australia was not increasing was attributed to an efficient detective force.

In April 1935 applications were called among members of the Adelaide Criminal Investigation Branch, for six Detectives to serve at country centres at Port Augusta, Port Lincoln, Wallaroo, Peterborough, Renmark, and Bordertown, to investigate sheep stealing. 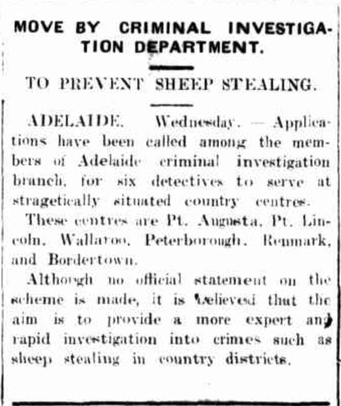 1935 - Introduction of the Modus Operandi system. 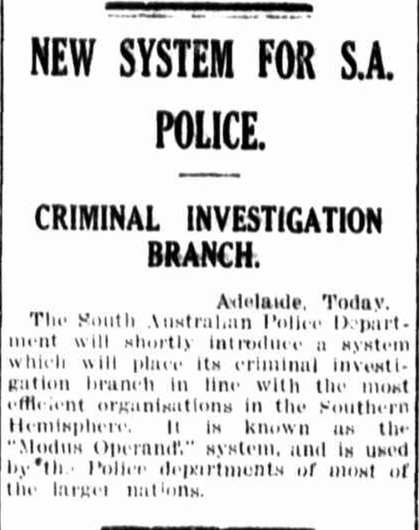 In April 1935 applications were called among members of the Adelaide Criminal Investigation Branch for six Detectives to serve at country centres of Port Augusta, Port Lincoln, Wallaroo, Peterborough, Renmark, and Bordertown.

The Border Chronicle Bordertown reported that the aim was 'to provide more rapid investigations of crime, such as sheep stealing in country districts". 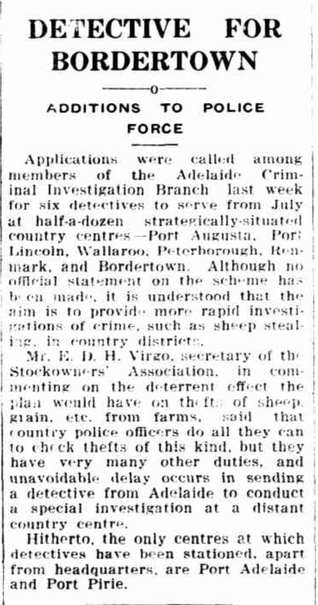 Above:- Article from the Border Chronicle Bordertown, Fri 12 Apr 1935. 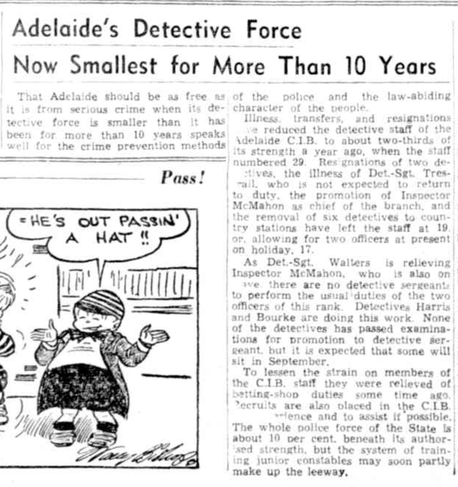 During the 1950s the Criminal Investigation Branch was located on the first floor of the Magistrates Court building located at 1 Angas Street, Adelaide. 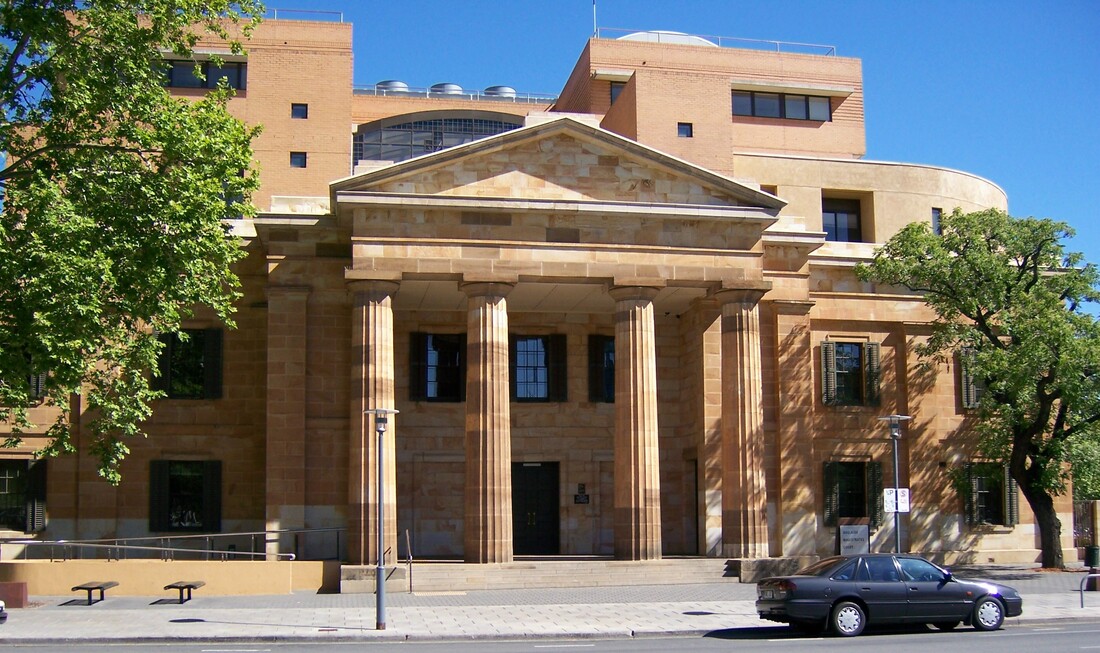 In 1951 the very first squad was formed in South Australia, the Homicide Squad.  It came under the command of Detective Inspector Gully.

In November 1951, Police Commissioner Ivor Green, announced that a departmental committee had been working on details of a special syllabus for Detective and CIB traning. 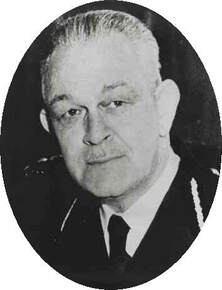 Above: Commissioner Green.  Image c/o anglicancemeteries.com
Green stated that young police officers who desired would need to undertake the instructional course for entry to the C.I.B.  The course was to be known as the Criminal Investigation Branch Training Course. 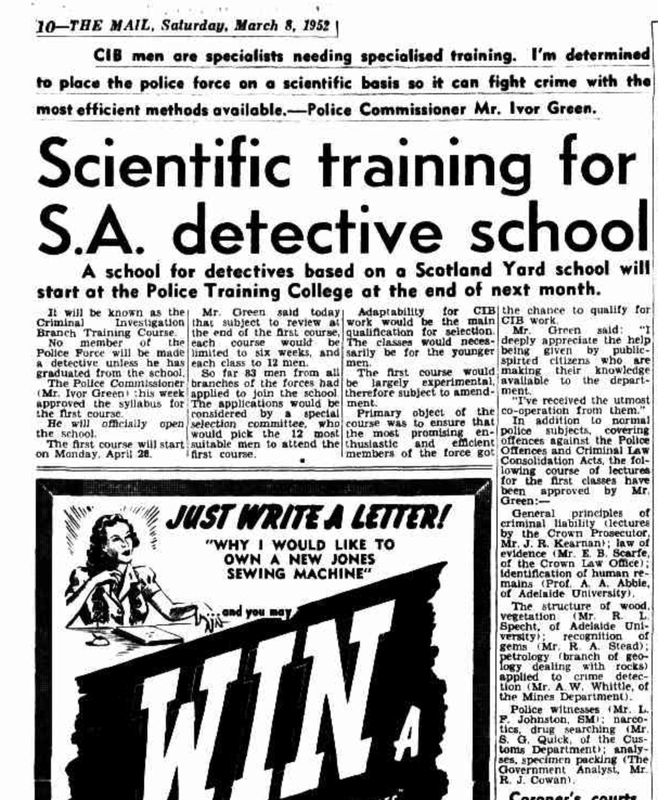 The first Detective Training course in South Australia was conducted in 1952.  A total of twelve police officers attended the six week course which commenced on the 28th day of April.

A Selection Committee chose 12 men for the first course from 83 applications received from all branches of the Force. 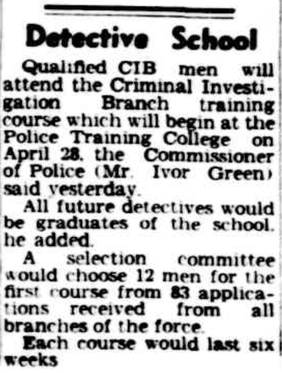 During the early 1950s a number of specialised Squads were formed.  The Advertiser Friday 18th July 1952 reported that the squads had not been previously been required as 'specialised crime had been less prevalent". 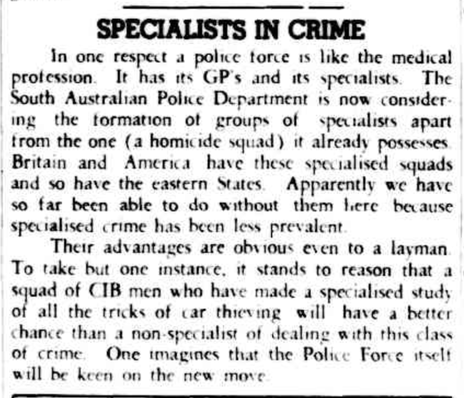 Above: Article from The Advertiser, Fri 18 July 1952.  c/o Trove
The first to be formed was the the Homicide Squad.  This was followed in July 1952 by the Breaking Squad, General Squad, Company & Fraud Squad, and the Motor  Squad.​

In 1965 a multi storey building was constructed in Angas Street, Adelaide, alongside of the Magistrates Court. 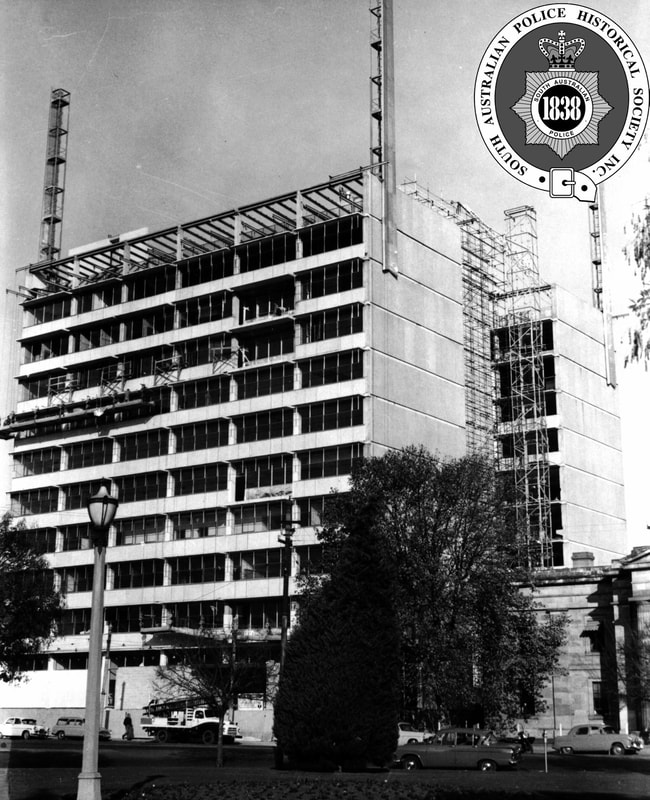