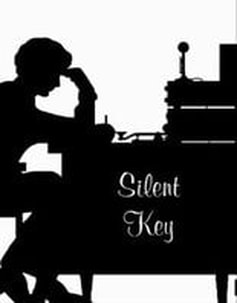 Larry's funeral service was held on 8th December 2015 at Renmark.

The service was well attended by many of Larry's family and friends from all across Australia.  A number of members of the South East Radio Group (SERG) were in attendance including Col VK5HCF, Tom VK5EE, Greg VK5ZGY and wife Gabbi.   AREG was also represented by Matt VK5ZM and Andy VK5AKH.  A number of Riverland Radio Club members were in attendance. 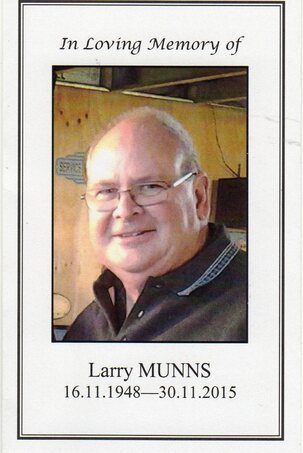 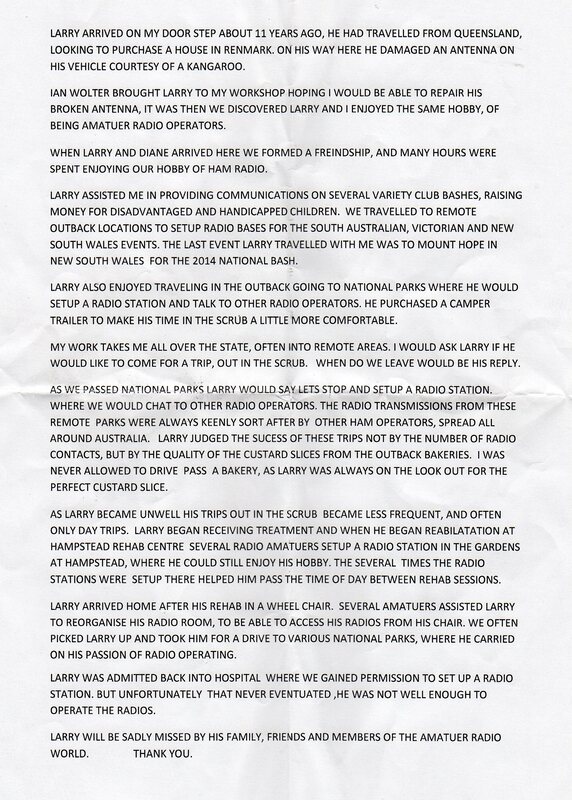 'Sorry to hear that news.  Larry was also a great advocate for APRS.  He ran an iGate for many years providing a valueable service for mobiles on HF.  RIP'..........Gerard VK2IO.

'Vale Larry, Larry will be missed in the AR fraternity, especially by the parks hunters and activators'..........Les Virgo VK5KLV.

'That is terribly sad news. I've have him in the log for a number of parks for SANCPA. I also know that he was also involved with APRS.  May he rest in peace.'..........Peter VK3TKK

'Sad news indeed. I had my first contact with Larry during the 2014 Keith Roget weekend, when he slipped across the border to activate Murray-Sunset NP, and is a part of the award I recently attained, thanks mate.  RIP Larry.'..........Mick VK3PMG

'Larry features in my earlier logbooks quite a lot, and was always happy to have a chat. I never met him in real life, but when you chat to some people on air so often, you feel like you know them pretty well and he will be greatly missed. My condolences to Di and his family.'..........Amanda VK3FQSO.

'I enjoyed many colourful and vibrant QSO's with Larry VK5LY, since becoming involved in the Parks programs.  Most of those contacts were from or too Parks of all types.  Larry certainly  was a very keen supporter of Portable activities and his presence will be greatly missed.  My thoughts are with Larry's family and friends at this difficult time.'..........Tony VK3VTH

"Deep condeolences to Di and his family.  When all the sadness will go away.  You will remember only the good moment with him.  RIP'..........Yves ON8ON Belgium.

'Thank you for posting this.  I'm sorry I never had the pleasure of talking to him.  Condolences to his family and friends'..........Michael Marriage VK6MMB.

'I didn't know Larry but I had copied him a couple of tomes from parks.  Even though I didn't know Larry I felt saddened on hearing the bad news.  Just shows me what a small community we belong to.  Vale Larry VK5LY'.....John Karr VK3FMPB.